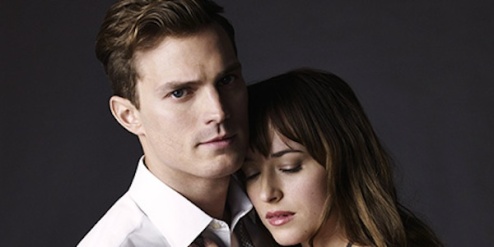 Let me just preface this by saying in no way am I a connoisseur of literature or writing. I mainly read non-fiction, so any fiction I do read is usually simple, fun and easy to understand (Dan Brown, Janet Evanovich, etc.). It’s a break for my constantly stimulated brain. So when I say that the ‘Fifty Shades of Grey’ books are terrible, you know that’s coming from someone who LIKES terrible books. I know that’s some messed up logic, but stick with me.

Before I continue, I’d like to quote Stanford University’s definition of Relationship Abuse:

Please keep that definition in mind when I inform you of one of the main character’s antics.

Christian Grey is a bajillionaire with floppy hair, a sculpted chest, moodiness, a dark past and… uh… sorry, I just fell asleep. I have such a strong feeling of déjà vu. OH I KNOW WHY. BECAUSE IT’S THE EXACT SAME PLOT AS TWILIGHT.

Christian is described as ‘Fifty Shades of Fucked Up’, which is the only thing in the books I agree with. He exhibits unmistakable behaviours and mental patterns of an abusive partner. I have a feeling that the author (E.L James) thought this would be okay and overlooked by the reader due to the fact that he had an abusive childhood, which apparently led to his ‘kinky’ love of BDSM sexual practices. She seems to be right. The amount of women lapping these books up without thinking twice about what it’s endorsing is sickening. Christian is controlling, insanely jealous, overpowering, manipulative, sexist and very unstable. One of my favourite descriptions of this abhorrent character comes from Aaron Mettey:

‘Truthfully, if I didn’t know that the book was a romance, I would have thought Ana would eventually wake up plastic-wrapped to a table, Dexter style.’

Oh who am I kidding? None of you are going to waste your time or money on this rubbish.

At the beginning, Anastasia Steele (yes, let that name soak in for a minute and try and keep the bile from rising in your throat) signs a contract to be Christian’s ‘Sub’ in a Dominant and Submissive sexual relationship. This contract says that Christian controls what she wears, when she eats, when she sleeps, what he does (sexually) to her, etc. Awesome, that’s her choice; she knows what’s going on. As the books progress, they fall in love and all that mushy crap and Christian tears up the contract. That should be the end and they should live happily ever after. However, Christian still likes to think he’s dominant over her and can control her.

She has to get his permission to wear certain clothes, he determines when she eats and sleeps, he cuts her off from her friends and family, he becomes insanely jealous over her male friends, he urges her to quit her job (when she doesn’t he buys the company so he can keep an eye on her), and he forces her to be responsible for all contraception. Remember that definition of relationship abuse? I’d say it’s pretty much spot on in this circumstance. But you may say, ‘He never physically abused her, it doesn’t count’. This is a common misconception about the definition of ‘abuse’. You don’t need cuts or bruises to feel abused. Mental, emotional and psychological manipulation can damage one’s self esteem, independence, self-efficacy and sense of worth, often leading to depression, anxiety and sometimes even suicide. Furthermore, I counted 3 instances in which he threatened physical violence against her (her only crime was leaving the house without him).

I do realise this is simply a poorly written fiction book, and I wouldn’t be so concerned if only a few women were picking it up for a quick read, but the fact is, it’s so widespread and popular (and has now been made into a movie), infiltrating pop culture and infecting so many impressionable brains. A lot of people connect deeply with books (myself included) as they can help shape your lives, ideas, opinions, and morality. These books spread the unhealthy message that abuse is sexy, acceptable, and dreamy. Somehow, if an abuser is rich and handsome, his behaviour is acceptable and even revered. It’s a slap in the face to all those men and women who suffer from real relationship abuse and it trivialises the issue.